as part of my diy twitter client project i've been using the twitter sample streams as a source of unlabelled data for some mutual information analysis. these streams are a great source of random tweets but include a lot of non english content. extracting the english tweets would be pretty straight forward if the ['user']['lang'] field of a tweet was 100% representative of the tweet's language but a lot of the times it's not; can we use these values at least as a starting point?

yes, yes, i realise that testing against the same data you've trained against is a big no no but i'm curious...

let's start with 100,000 tweets taken from the sample stream. we'll use vowpal wabbit for the classifier and extract features as follows...

we treat tweets marked as user_lang=en as the +ve case for the classifier (class 1) and all other tweets as the -ve case (class 0).

the standard output for predictions from vowpal is a value from 0.0 (not english) to 1.0 (english) but we'll use the raw prediction values instead; the magnitude of these in some way describes the model's confidence in the decision.

it's not getting 100% (what classifier ever can?) and in part it's since the labelling is "incorrect" at times.

we can use perf to check the accuracy of the model (though it's not really checking "accuracy", more like checking "agreement") and doing this we can see the classifier is correct roughlty 82% of the time.

(see evaluate.sh for the code to reproduce this)

so it generally does well but the most interesting cases are when the model doesn't agree with the label.

this is great! the model has correctly identified this instance is mislabelled. however sometimes the model disagrees and is wrong...

a bit of poking through the tweets shows that there are enough russian tweets marked as english for it to be learnt as english...

we can score each tweet based on how much the model disagrees (mean square error of "disagreement" across the multiple runs) and we see, at least for the top 200, that the model was right the vast majority of the time (ie the language of the tweet isn't the user_lang).

what we can do then is trust the model and change the user_lang as required for the top, say, 100 and reiterate.

if we do this overall iteration 10 times we see a gradual improvement in the model. 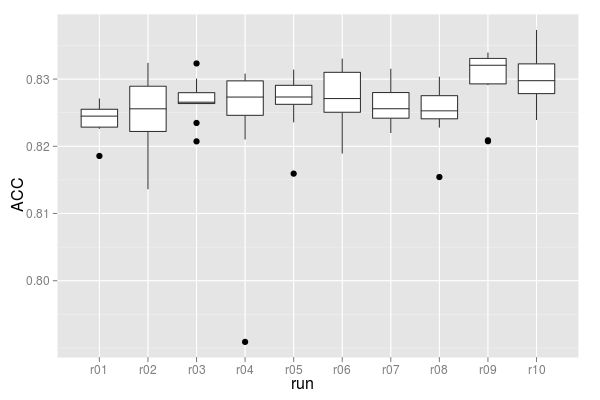 but an even simpler solution

the iterative solution was novel but it turns out there's a much better solution; make a first pass on the data and if you see one of the common non english characters и, の, ل or น just mark the tweet as non english.

if we do this we get an immediate improvement 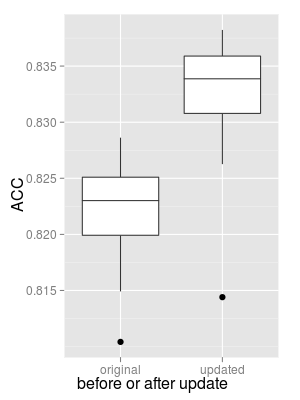 and you don't need a t-test to see this change is significant :)