the jaccard coefficient is one of the fundamental measures for doing set similarity.

one thing that's always annoyed me about it though is that is loses any sense of partial similarity. as a set based measure it's all or nothing. 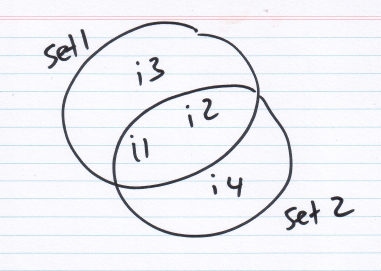 after lots of googling i couldn't find a jaccard variant that supports this idea so i rolled my own. the idea is that we want to count the values in the complement of the intersection not as 0.0 on the jaccard numerator but as some value ranging between 0.0 and 1.0 based on the similarity of the elements. after some experiments i found that just counting each as the root mean sqr value of the pairwise sims of them all works pretty well. i'd love to know the name of this technique (or any similar better one) so i can read some more about it.

this is great for me because now given an appropriate similiarity function i'm able to get a lot more discrimination between sets.