PyMC is a python library for working with bayesian statistical models, primarily using MCMC methods. as a software engineer who has only just scratched the surface of statistics this whole MCMC business is blowing my mind so i've got to share some examples.

a common first step might be to generate a histogram. 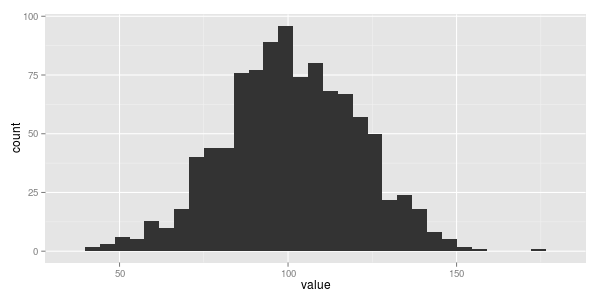 if i had to a make a guess i'd say this data looks normally distributed. somewhat unsurprising, not just because normal distributions are freakin everywhere, (this great khan academy video on the central limit theorem explains why) but because it was me who synthetically generated this data in the first place ;)

!!warning!! !!!total overkill alert!!! there must be a bazillion simpler ways to fit a normal to this data but this post is about dead-simple-PyMC not dead-simple-something-else.

first a definition of our model.

working backwards through this code ...

the second part of the code runs the MCMC sampling.

working forwards through this code ...

now i've brushed over a couple of things here (eg the use of uniform prior over the precision, see here for more details) but i can get away with it all because this problem is a trivial one and i'm not doing gibbs sampling in this case. the main point i'm trying to make is that it's dead simple to start writing these models.

one thing i do want to point out is that this estimation doesn't result in just one single value for mean and precision, it results in a distribution of the possible values. this is great since it gives us an idea of how confident we can be in the values as well as allowing this whole process to be iterative, ie the output values from this model can be feed easily into another.

all the code above parameterised the normal distribution with a mean and a precision. i've always thought of normals though in terms of means and standard deviations (precision is a more bayesian way to think of things... apparently...) so the first extension to my above example i want to make is to redefine the problem in terms of a prior on the standard deviation instead of the precision. mainly i want to do this to introduce the deterministic concept but it's also a subtle change in how the sampling search will be directed because it introduces a non linear transform.

we fit the model using the same run_mcmc.py but this time get estimates for the std_dev not the precision

which all matches up to how i originally generated the data in the first place.. cool!

for this example let's now dive a bit deeper than just the stats object. to help understand how the sampler is converging on it's results we can also dump a trace of it's progress at the end of run_mcmc.py

plotting this we can see how quickly the sampled values converged. 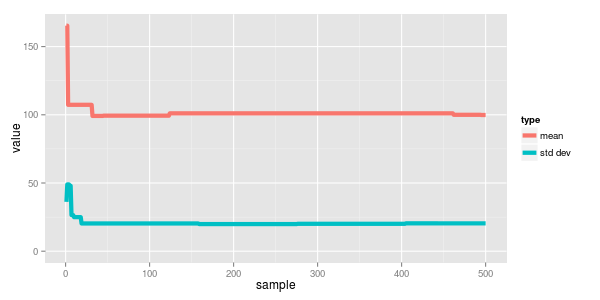 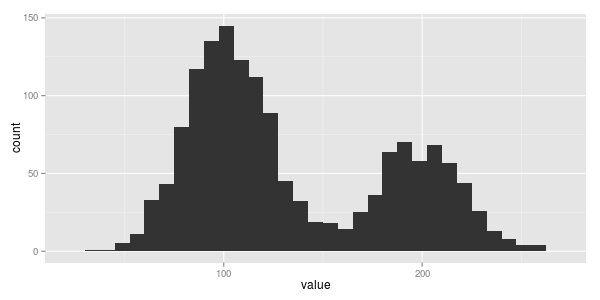 hmmm. looks like two normals this time with the one centered on 100 having a bit more data.

how could we model this one?

reviewing the code again it's mostly the same the big difference being the deterministic definition of the mean. it's now that we finally start to show off the awesome power of these non analytical approaches.

line 12 defines the mean not by one mean variable but instead as a mixture of two, mean1 and mean2. for each value we're trying to model we pick either mean1 or mean2 based on another random variable bern. bern is described by a bernoulli distribution and so is either 1 or 0, proportional to the parameter theta.

what we are solving for then is not just mean1 and mean2 but how the values are split between them (described by theta) (and note for the sake of simplicity i made the two normal differ in their means but use a shared standard deviation. depending on what you're doing this might or might not make sense)

reviewing the traces we can see the converged means are 100 & 200 with std dev 20. the mix (theta) is 0.33, which all agrees with the synthetic data i generated for this example... 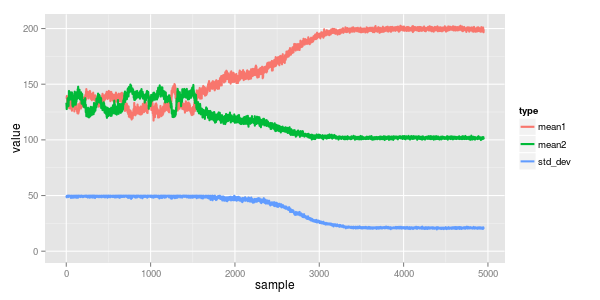 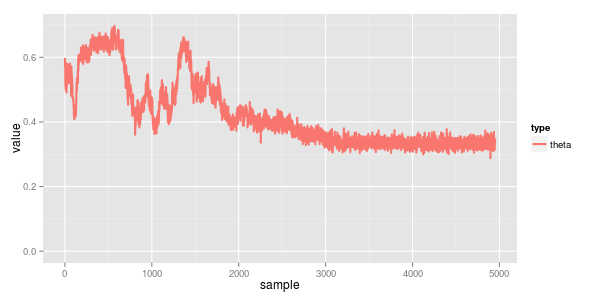 to me the awesome power of these methods is the ability in that function to pretty much write whatever i think best describes the process. too cool for school.

i also find it interesting to see how the convergence came along... the model starts in a local minima of both normals having mean a bit below 150 (the midpoint of the two actual ones) with a mixing proportion of somewhere in the ballpark of 0.5 / 0.5. around iteration 1500 it correctly splits them apart and starts to understand the mix is more like 0.3 / 0.7. finally by about iteration 2,500 it starts working on the standard deviation which in turn really helps narrow down the true means.

(thanks cam for helping me out with the formulation of this one..)

in general i've been working through an awesome book, doing bayesian data analysis, and can't recommend it enough.

i also found john's blog post on using jags in r was really helpful getting me going.

all the examples listed here are on github.

next is to rewrite everything in stan and do some comparision between pymc, stan and jags. fun times!