do all first links on wikipedia lead to philosophy?

a recent xkcd posed the idea...

wikipedia trivia: if you take any article, click on the first link in the article text not in parentheses or italics, and then repeat, you will eventually end up at Philosophy.

this raises a number of questions

there's only one way to find out!

getting and processing the data

for my first attempt i tried to use the freebase wikipedia dump. my thought was it'd be easier to deal with a preparsed dataset but it didn't turn out.

instead i went for a raw wikimedia dump, in particular enwiki-latest-pages-articles.xml.bz2. the version at the time of writing this blog was 7gb compressed & 30gb uncompressed. it's already up to 9gb as of Feb 2013!

for preprocessing there were a number of steps

some general statements before we go further

the end result of the parsing is a list of 3.6e6 edges of the form 'article' -> 'first link to next article' (after following redirects).

all the 'article's are unique but there are only 500e3 distinct 'next article's which is already very interesting; it means less than 15% of articles on wikipedia are represented by one of these first links; this graph is very "bushy" (ie lots of leaf nodes).

to calculate the distance from 'Philosophy' for all articles it's a straight forward breadth first search and because this search doesnt cycle back to 'Philosophy' again it ends up building a tree.

with this tree we can start answering some of our original questions ...

Q: though i wouldn't be surprised if it's true for most articles it can't be true for all articles. can it?

these 100e3 fall into two types

2) the other 50e3 are dead ends; all sorts of examples for this, mainly around pages that were never written or have been deleted.

Q: what's the distribution of distances of articles from 'Philosophy'?

the bulk of the articles are between 10 to 30 clicks away... 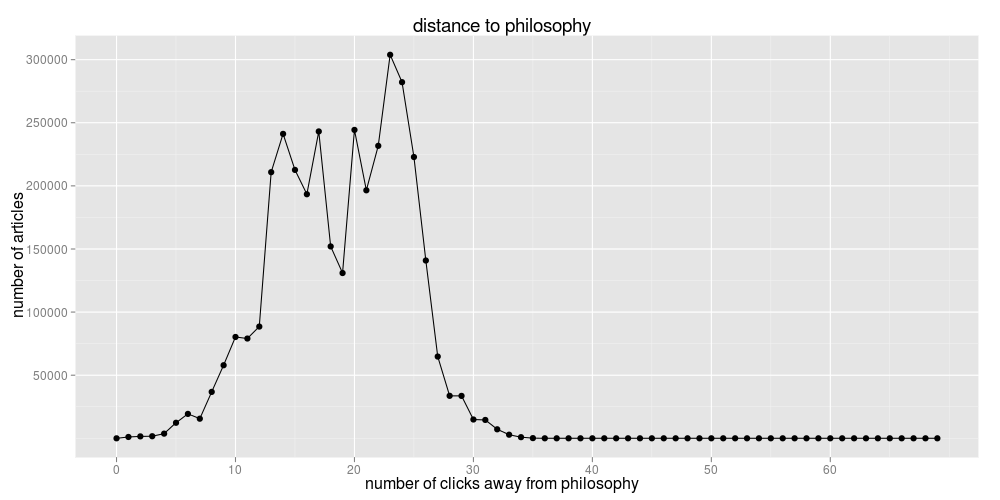 i've trimmed this graph at 70 clicks away since there's a long tail of one single path that is 1001 articles long.

seems a bit of a "meta article" outlier we can ignore.

( there's an interesting dip at a distance of 19 too; wonder what's going on there? )

'Violet & Daisy' is the longest chain i found that didn't include "meta" pages with some kind of sequence number in it. it's 36 articles from 'Philosophy'.

Q: are there any other articles that are "more common" than 'Philosophy'?

with 95+% of articles clicking through to 'Philosophy' it's not possible for there to be another unconnected graph with an article more represented than 'Philosophy'.

but if we continue to click through past 'Philosophy' we see we're in a short cycle of 12 articles...

so really any of these are reasonable candidates and are equally good as 'Philosophy' itself for this game.

Q: what are the common paths into 'Philosophy'?

as mentioned the breadth first search builds a tree of articles with 'Philosophy' at it's root.

by ranking articles by this metric we can observe the core structure of the tree.

in fact for the top 10 ranked articles it's hardly a tree, just the chain ...

(width of the edge is proportional to the number of descendants)

in fact it's not until we consider up to the 20th ranked item, 'Biology', before it actually becomes a tree structure ...

when we consider the top 200 things start to look a bit more interesting ... and by the top 1000 things are starting to lose an obvious core structure ...

( though dot's a pretty poor layout engine for this one, i should redo this one )

so i managed to answer the main questions i had, but it's a fun dataset so there's lots more to do yet!