one thing in theano i couldn't immediately find examples for was a simple embedding lookup table, a critical component for anything with NLP. turns out that it's just one of those things that's so simple no one bothered writing it down :/

tl;dr : you can just use numpy indexing and everything just works.

if we want to concatenate them into a single vector (a common operation when we're feeding up to, say, a densely connected hidden layer), it's a reshape

all the required multi dimensional operations you need for batching just work too..

this type of packing of the data into matrices is crucial to enable linear algebra libs and GPUs to really fire up.

the entire theano code (sans imports) is the following..

first we initialise the embedding matrix as before

the "network" is just a dot product of two embeddings ...

we can generate training examples by randomly picking two elements and assigning label 1.0 for the pairs 0 & 1, 2 & 3 and 4 & 6 (and 0.0 otherwise) and every once in awhile write them out to a file.

plotting this shows the convergence of the embeddings (labels denote initial embedding location)... 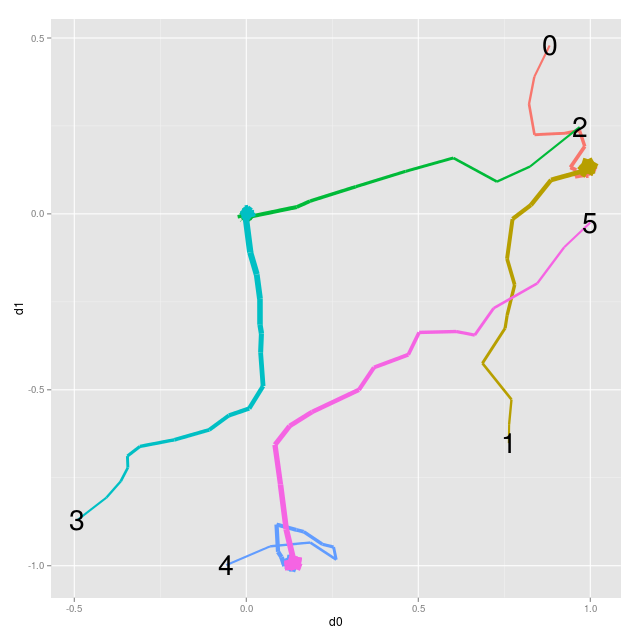 a note on dot products

it's interesting to observe the effect of this (somewhat) arbitrary cost function i picked.

for the pairs where we wanted the embeddings to be same the cost function, \( |1 - a \cdot b | \), is minimised when the dotproduct is 1 and this happens when the vectors are the same and have unit length. you can see this is case for pairs 0 & 1 and 4 & 5 which have come together and ended up on the unit circle. but what about 2 & 3? they've gone to the origin and the dotproduct of the origin with itself is 0, so it's maximising the cost, not minimising it! why?

it's because of the other constraint we added. for all the pairs we wanted the embeddings to be different the cost function, \( |0 - a \cdot b | \), is minimised when the dotproduct is 0. this happens when the vectors are orthogonal. both 0 & 1 and 4 & 5 can be on the unit sphere and orthogonal but for them to be both orthogonal to 2 & 3 they have to be at the origin. since my loss is an L1 loss (instead of, say, a L2 squared loss) the pair 2 & 3 is overall better at the origin because it gets more from minimising this constraint than worrying about the first.

you can also see how the points never fully converge. in 2d with this loss it's impossible to get the cost down to 0 so they continue to get bumped around. in 3d, as just mentioned, the cost can be 0 and the points would converge.

a note on inc_subtensor optimisation

there's one non trivial optimisation you can do regarding your embeddings that relates to how sparse the embedding update is. in the above example we have 6 embeddings in total and, even though we only update 2 of them at a time, we are calculating the gradient with respect to the entire t_E matrix. the end result is that we calculate (and apply) a gradient that for the majority of rows is just zeros.

you can imagine how much sparser things are when you've got 1M embeddings and are only updating <10 per example :/

and of course you should only do this once you've proven it's the slow part...

for code, see this gist