ensemble nets are a method of representing an ensemble of models as one single logical model. we use jax's vmap operation to batch over not just the inputs but additionally sets of model parameters. we propose some approaches for training ensemble nets and introduce logit dropout as a way to improve ensemble generalisation as well as provide a method of calculating model confidence.

update: though i originally developed this project using vmap, which is how things are described below, the latest version of the code is a port to use pmap so we can run on a tpu pod slice, not just one machine

as part of my "embedding the chickens" project i wanted to use random projection embedding networks to generate pairs of similar images for weak labelling. since this technique works really well in an ensemble i did some playing around and got the ensemble running pretty fast in jax. i wrote it up in this blog post. since doing that i've been wondering how to not just run an ensemble net forward pass but how you might train one too...

for this problem we'll work with the eurosat/rgb dataset. eurosat/rgb is a 10 way classification task across 27,000 64x64 RGB images

here's a sample image from each of the ten classes...

all convolutions use 3x3 kernels with a stride of 2. the conv layers and the single dense layer use a gelu activation. batch size is represented by B.

we use no batch norm, no residual connections, nothing fancy at all. we're more interested in the training than getting the absolute best value. this network is small enough that we can train it fast but it still gives reasonable results. residual connections would be trivial to add but batch norm would be a bit more tricky given how we'll build the ensemble net later.

we'll use objax to manage the model params and orchestrate the training loops.

training for the baseline will be pretty standard but let's walk through it so we can call out a couple of specific things for comparison with an ensemble net later...

( we'll use 2 classes in these diagrams for ease of reading though the eurosat problem has 10 classes. ) 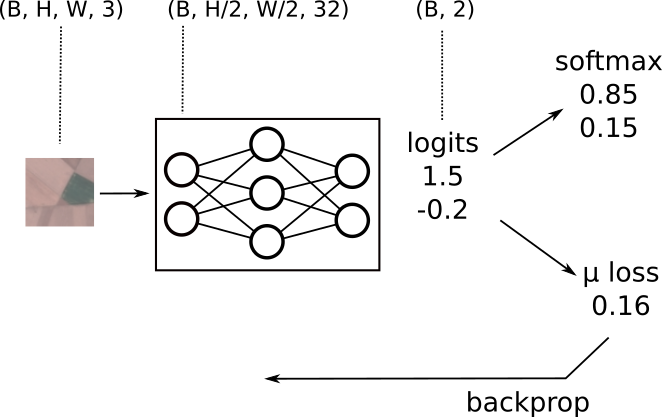 walking through left to right...

we'll train on 80% of the data, do hyperparam tuning on 10% (validation set) and report final results on the remaining 10% (test set)

for hyperparam tuning we'll use ax on very short runs of 30min for all trials. for experiment tracking we'll use wandb

the hyperparams we'll tune for the baseline will be...

we'd usually make choices like the conv sizes being powers of 2 instead of a smooth value but i was curious about the behaviour of ax for tuning. also we didn't bother with a learning rate schedule; we just use simple early stopping (against the validation set)

the best model of this group gets an accuracy of 0.913 on the validation set and 0.903 on the test set. ( usually not a fan of accuracy but the classes are pretty balanced so accuracy isn't a terrible thing to report. )

so what then is an ensemble net?

logically we can think about our models as being functions that take two things 1) the parameters of the model and 2) an input example. from these they return an output.

we pretty much always though run a batch of B inputs at once. this can be easily represented as a leading axis on the input and allows us to make better use of accelerated hardware as well as providing some benefits regarding learning w.r.t gradient variance.

jax's vmap function makes this trivial to implement by vectorising a call to the model across a vector of inputs to return a vector of outputs.

and there's no reason why we can't do both batching across both a set of inputs as well as a set of model params at the same time.

for a lot more specifics on how i use jax's vmap to support this see my prior post on jax random embedding ensemble nets.

and did somebody say TPUs? turns out we can make ensemble nets run super fast on TPUs by simply swapping the vmap calls for pmap ones! using pmap on a TPU will have each ensemble net run in parallel! see this colab for example code running pmap on TPUs

let's walk through this in a bit more detail with an ensemble net with two sub models. 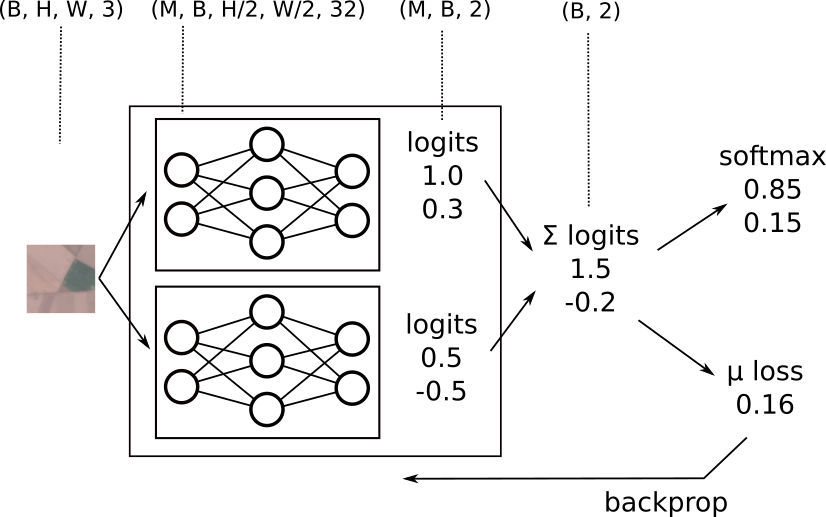 this gives us a way to train the sub models to act as a single ensemble unit as well as a way to run inference on the ensemble net in a single forward pass.

we'll refer to this approach as single_input since we are starting with a single image for all sub models.

an alternative approach to training is to provide a separate image per sub model. how would things differ if we did that? 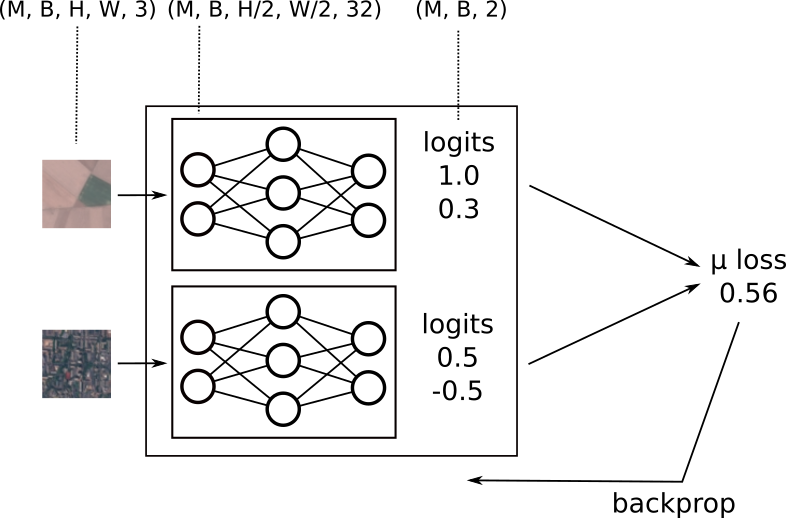 we'll call this approach multi_input. note that this way of feeding separate images only really applies to training; for inference if we want the representation of the ensemble it only really makes sense to send a batch of (B) images, not (M, B).

let's do some tuning as before but with a couple of additional hyper parameters that this time we'll sweep across.

when we poke around and facet by the various params there's only one that makes a difference; single_input mode consistently does better than multi_input. 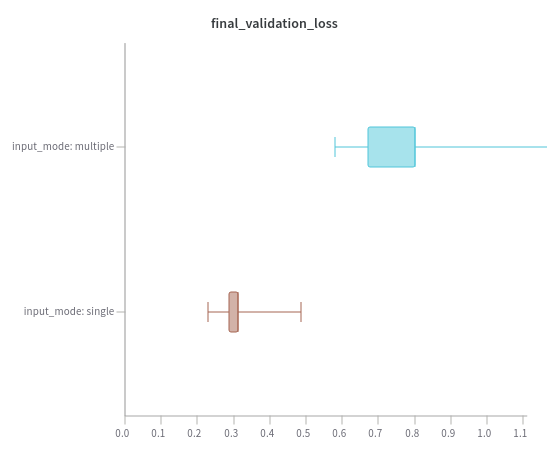 when we check the best single_input 4 sub model ensemble net we get an accuracy of 0.920 against the validation set and 0.901 against the test set

looking at the confusion matrix the only really thing to note is the slight confusion between 'Permanent Crop' and 'Herbaceous Vegetation' which is reasonable given the similarity in RGB. 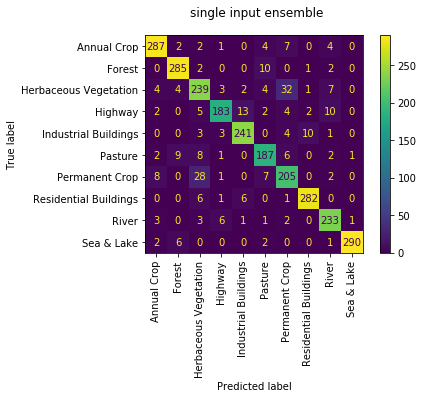 we can also review the confusion matrices of each of the 4 sub models run as individuals; i.e. not working as an ensemble. we observe the quality of each isn't great with accuracies of [0.111, 0.634, 0.157, 0.686]. again makes sense since they had been trained only to work together. that first model really loves 'Forests', but don't we all...

the performance of the multi_input ensemble isn't quite as good with a validation accuracy of 0.902 and test accuracy of 0.896. the confusion matrix looks similar to the single_input mode version. 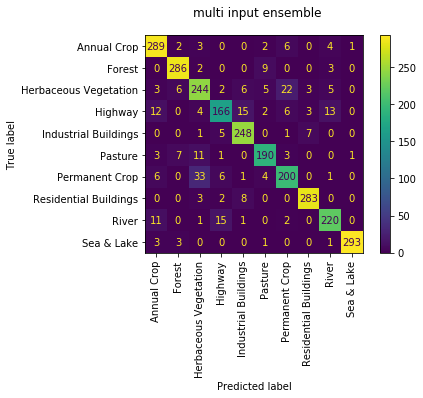 this time though the output of each of the 4 sub models individually is much stronger with accuracies of [0.842, 0.85, 0.84, 0.83, 0.86]. this makes sense since they were trained to not predict as one model. it is nice to see at least that the ensemble result is higher than any one model. and reviewing their confusion matrices they seem to specialise in different aspects with differing pairs of confused classes.

the main failing of the single_input approach is that the sub models are trained to always operate together; that breaks some of the core ideas of why we do ensembles in the first place. as i was thinking about this i was reminded that the core idea of dropout is quite similar; when nodes in a dense layer are running together we can drop some out to ensure other nodes don't overfit to expecting them to always behave in a particular way.

so let's do the same with the sub models of the ensemble. my first thought around this was that the most logical place would be at the logits. we can zero out the logits of a random half of the models during training and, given the ensembling is implemented by summing the logits, this effectively removes those models from the ensemble. the biggest con though is the waste of the forward pass of running those sub models in the first place. during inference we don't have to do anything in terms of masking & there's no need to do any rescaling ( that i can think of ).

so how does it do? accuracy is 0.914 against the validation set and 0.911 against the test set; the best result so far! TBH though, these numbers are pretty close anyways so maybe we were just lucky ;) 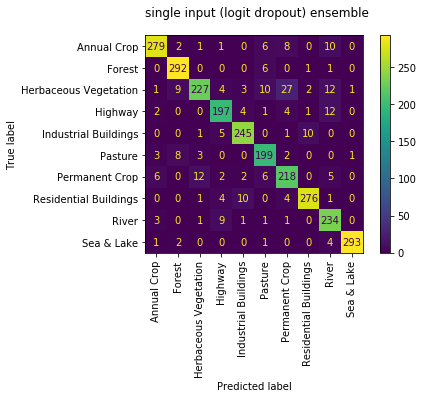 with the ensemble model that has been trained with logit dropout we can get an idea of this variance by considering the ensemble in a hold-one-out fashion; we can obtain M different predictions from the ensemble by running it as if each of the M sub models was not present (using the same idea as the logit dropout).

consider a class that the ensemble is very good at; e.g. 'Sea & Lake'. given a batch of 8 of these images across an ensemble net with 4 sub models we get the following prediction mean and stddevs.

whereas when we look at a class the model is not so sure of, e.g. 'Permanent Crop', we can see that for the lower probability cases have a higher variance across the models.